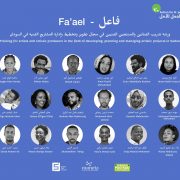 Sudan Film Factory participated in a training workshop entitled “Fa’ael (Doer) in Sudan” for artists and producers in the field of developing, planning, and managing artistic projects in Sudan. This was organized by the Foundation “Action for Hope” with support from the Svenska Postkodstiftelsen (Swedish Post) and Mimeta. The workshop was held in Nairobi from the 10th to the 17th of May 2022, during which 18 cultural actors and artists from different states in Sudan participated. Action for Hope received 151 applications to participate in the workshop, and 18 participants were selected on the basis of their experiences in cultural and social work, and on the description of the projects they plan to implement. The selection took into consideration the geographic distribution of projects across the different states in Sudan, and the gender balance.

Sudan Film Factory participated in the Sudanese European Film Festival, by screening five films from its distribution in the second session of the festival, which started on the 16th of June and continued until the 23rd of June, 2022. The films were selected according to their very distinguished visual levels. These films were made with love and diligence which led to amazing results.

The films are: “A Handful of Dates” directed by Hashim Hassan, which is set in a village in northern Sudan, where the director is inspired by the story of Al-Tayeb Salih, with the same title. The film tells the story of a young boy passionate about his village and his grandfather, but the boy’s precious world begins to unravel when he learns the painful truth behind his grandfather’s fortune.

It is Hashem’s fourth short film and his first cinematic project in Sudan. “Serotonin” directed by Shehab Satti, is an experimental film about life and isolation. The film won the Hussein Sharif “Black Elephant” Award for Best Sudanese Film from the Sudan Independent Film Festival 2018. “Searching for Art” by Mai Elgizouli, is a film that tries to self-portray and explore the feelings and thoughts of a young Sudanese artist during the pandemic lockdown.

The film “Brick of Life” By Razan M. Abdelrahman deals with the reflection of the Darfour war aftermath on women’s wellbeing and rights, by shedding light on the suffering of Sudanese young women working in Brick kiln making, in Abu Shouk IDP camp in Darfour. It is about the pain and dreams of these women living amidst harsh circumstances.

Lastly, the “Alfundug” film, directed by Mohamed Elmur. In his first directing experience, the director presents the story of a group of individuals who go through a life-changing experience in a deserted location. The film depicts some of the most controversial social structures, which almost all Sudanese citizens go through. The film uses symbolism to narrate how some citizens navigate their way through a society filled with prejudices.