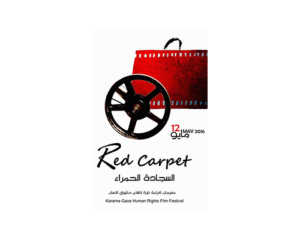 Red Carpet Human Rights Film Festival is a festival for short and long narrative and documentary films will be held in Gaza Strip on 12-14 May. It is the first festival that highlights human rights issues, mainly in Palestine and generally all over the world. The opening of the first day of the three-day festival’s activities will be held next to the debris of the destroyed homes in Sheja’eya neighborhood (Al Tawiq ) in eastern Gaza. The festival is a part of a joint event held in with Karama Festival for Human Rights Films held in Amman in the same time