Karama HRF Festival 2018 | You are not Alone

Because cinema is a wide space for storytelling, crossing the horizons and crossing barriers in a beautiful visual language, it is now the most powerful medium for promoting human culture and rights.

Over the course of six days, Karama presented daily performances at the Royal Cultural Center for 74 films from 25 countries, dealing with different dimensions of human rights. The official theme of the festival was “You Are Not Alone” with a great focus on women, their issues and their roles in different fields, as well as the complementary relationship between women and men.

Karama highlighted the achievements of women in various fields as a pioneers of Arab cinema, such as producers, filmmakers, actresses or professionals in the audiovisual industry.

All the films were most recent international productions, selected at Karama to be premiered in Amman. The festival hosted directors, actresses and actors, filmmakers, human rights activists, and a huge audience, eager to attend films different from those that are being screened in commercial cinemas. 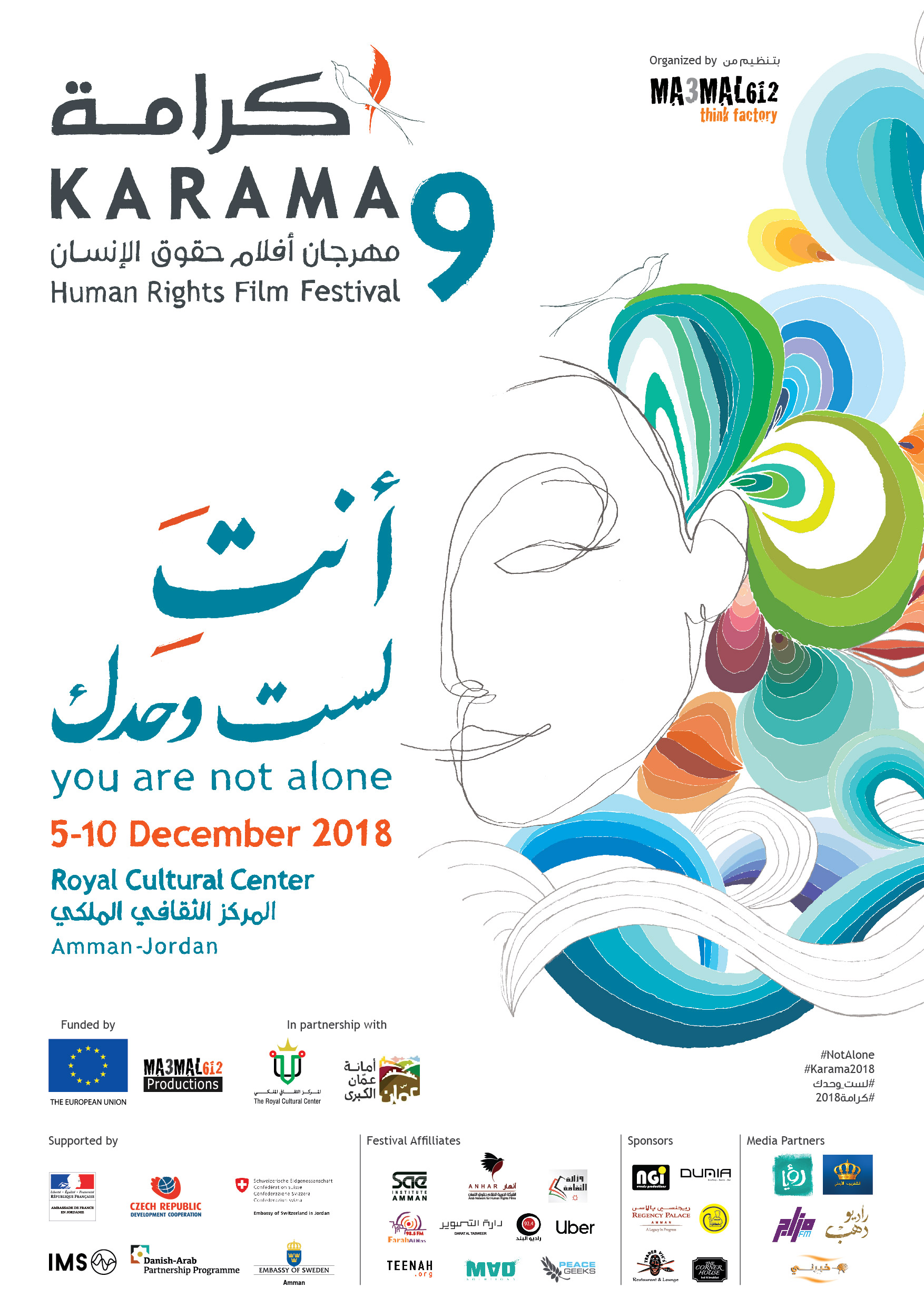 Tunisian productions were present through several choices such as programming Tunisian films that tackle Tunisian society and the struggle and liberation of women in the Arab region, such as the opening film “Al Jaida” directed by Selma Baccar.

Winners of the Awards

The ANHAR Award, which seeks to support the best human rights in the Arab region. The winning film was “Of Fathers and Sons” by Syrian director Talal Derki, tackling Syrian conflict, and how violence is transmitted from generation to generation.

The film revolves around the story of a conservative Syrian Family; the Director was able to gain their trust and convey a holistic and just representation of the relationship between the father and sons of the family as they raise them. For 330 days he lived with them and anticipated a prolific happening. The camera follows the children, the ways in which they are nurtured by being exposed to violent scenes and military trainings, in hopes of actualizing the father’s dream of creating an Islamic Khalifate.

The Role of Cinema and Human Rights

Human Rights films and cinema has become a lighthouse that sheds light upon the dangers human rights violations, politics, culture and linguistics. Ranging from torture and random detainments to journalistic censorship and administrative corruption, from marginalization and poverty to immigration and women rights.

The films that were screened represented the whole spectrum. Not to mention parallel events such as Q&As, round table discussions, focus groups and conferences that took place under the umbrella of Karama Human Rights Film Festival (KHRFF), that featured collaboration and intimate interactions between audiences, guests, filmmakers and activists.

KHRFF’s importance is consolidated by being the largest Human Rights Film Festival in the region with respect to the volume of films and its award giving ceremonies.

The theme of the festival, which is chosen annually, is linked to its predecessor and paves the way for following year as one integrated fabric. Each year the festival devotes a new idea, through which it sheds light on a new aspect of those violated rights, through beautiful cinematic language and intricate imagery, to be the voice of those who they represent and stand up for.

Over the Years, KHRFF has become an incubator and network for various other Festivals Starting in Jordan and spreading to create as Karama Yemen, Karama Mauritania, Karama Beirut, Karama Tunis and Karama Palestine. In this year’s edition in Jordan, they hosted the event “Window on Karama Yemen”; screening films by Yemeni film directors and writers, representing the humanitarian situations and the daily circumstances of the Yemeni People.

This Festival is proof that art through its expressive imagery continues to play its social and cultural role of spreading awareness, lobbying for advocacy and conveying messages of solidarity and shared human values of all those who suffer in the world.

The annual meeting of the Arab Network for Human Rights Film Festivals (ANH...
Scroll to top