Karama Beirut Human Rights Film Festival contributes among other well-established and renowned festivals in the world, to spreading a Human Rights Cinema that denounces racism, hatred discourse, discrimination and injustice. Aiming to mobilize solidarity and support with the minorities, the festival screens a selection of films from around the world, and holds open discussions to shed light on human rights violations worldwide and the prospects of social change and progress. 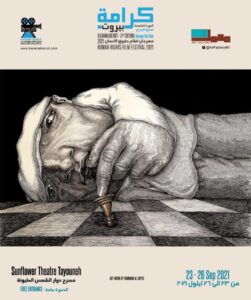 Karama Festival is a six day film festival which is held in Amman, Jordan since 2010. After 8 editions of Karama Human Rights Film Festival, 410 human rights films were screened over the course of 8 year of cinema activism and advocacy for human rights in Jordan and in the region. Around 8000 spectators from different fields come yearly to the event, attend, and participate in its diverse activities.

Earto Human Rights Film Festival is first of its kind in history of Libya which is held annually. And its first version took place during the period “10-14 Dec 2017” at Radiosn Blue Hotel’s cinema hall.

Red Carpet Human Rights Film Festival is a festival for short and long narrative and documentary films will be held in Gaza Strip on 12-14 May. It is the first festival that highlights human rights issues, mainly in Palestine and generally all over the world. The opening of the first day of the three-day festival’s activities will be held next to the debris of the destroyed homes in Sheja’eya neighborhood (Al Tawiq ) in eastern Gaza. The festival is a part of a joint event held in with Karama Festival for Human Rights Films held in Amman in the same time