The surprise waiting for the clown doll when he discovers his unique hat is not on his head when he went out of the surprise box!

Tariq Rimawi is a Jordanian film director and scriptwriter. His first degree was in graphic design. In 2010, he graduated with a Master’s degree in Animation from Newport Film School in the UK. His graduation stop-motion film entitled ‘Missing’ has been screened at more than 100 international film festivals. The film has also received 12 international awards. In 2013, he made a short animated film titled ‘Growing’ in cooperation with Al-Ma3mal 612. In 2014, he completed his PhD Animation studies at the Animation Academy at Loughborough University in the UK. 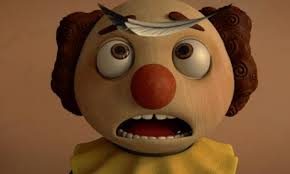