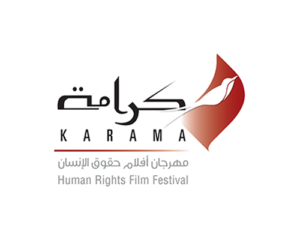 Karama Festival is a six day film festival which is held in Amman, Jordan since 2010. After 5 editions of Karama Human Rights Film Festival, 225 human rights films were screened during 5 years of cinema activism and advocacy for human rights in Jordan and in the region. Around 8000 spectators from different fields come yearly to the event, attend, and participate in its diverse activities. Managed and organized by al Ma3mal 612 Think Factory, every year, the KHRFF event includes a number of interrelated activities: screening of films (feature, documentary and short) from different parts of the world; films discussions and debates with some of the films’ production teams; seminars & workshops; ‘MusiKarama’ (music events) and dance performances; the ‘Conscious of Art’ (Art and Photo Exhibition); and Karama Atelier (at least 8 weeks workshop that takes place before the Festival for the production of relevant films to be screened during the festival).

The year 2015 marks Karama’s sixth edition. Beyond the first Karama Festival organized in December 2010, it gained the acknowledgement of many local, regional and international relevant stakeholders; official bodies, HR organizations and activists, similar festivals, Filmmakers and artists, donors, as well as the media. The Karama Team and packages were hosted in a great number of platforms both regionally and internationally, and has contributed largely to the establishment of two similar Human Rights Film Festivals in Tunis and Libya. In addition, together with a number of local partners, and under the management of Ashtar for Theater Production and Training, Karama had succeeded to jointly establish the Karama-Palestine HRFF (in December 2013), and the Karama-Mauritania HRFF (March 2014).