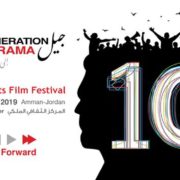 Under the theme “Karama Generation – Think Forward” which honored a generation of artists, activists and the youth that have become aware, engaged and committed to human rights values and issues in our region and beyond. The festival celebrated milestones in the past decade, but it also emphasized on its future progression. Think Forward was rather a call to action inspired by what has been done and what needs to be accomplished.

This Year’s festival witnessed a monumental shift. This year the festival was a rich 8 days packed with 100 films, along with 34 parallel events across 10 of the 12 Jordanian Governorates. The festival simultaneously opened in 9 governorates and was live streamed at the opening in the capital Amman. Its outreach program featured a dense variety of screenings within different universities, hubs and centers across the nation, along with the launch of the first “Karama Children Program” in collaboration with Haya Center in Amman and Zarqa. In addition to Karama Palestine screenings in the “Red Carpet” festival, and Ashtar theatre in Ramallah, along with parallel Screenings within Tyre Lebanon in collaboration with Tiro Istanbuli Festival.

The festival showcased a reflective “Karama Archive Exhibition” illustrating the journey of Karama HRFF in the past 10 years and beginning the conversation of its years to come. The festival also hosted a conference entitled “Cinema in Education”, wherein Ma3mal612, in collaboration with UNESCO, is working on a Curriculum for cinema institutions and universities across Jordan and Morocco. A “Youth Forum”, in collaboration with DROSOS foundation, in the form of a seminar/workshop wherein 11 youth projects were invited from 7 governorates for capacity building, training and networking.

Karama HRFF also included a full day program and panel discussion, in collaboration with IMS, entitled “No Means No!”, interrogating Gender based violence and its implications. Under the title “Low budget film – From Idea to Screen”, Karama guests Hala Galal and Sherif Mandour gave a master class in collaboration with and hosted by SAE Institute for Creative Media Industry. Furthermore, The Annual “Must Meet Meeting”- A meeting of global, regional and local actors in the film industry, ranging from festival directors to producers, and filmmakers- and the “ANHAR annual meeting” took place within the festival.

KARAMA also hosted two concerts for the Palestinian band 47 soul. And Last but not least, on the 10th of December, commemorating the international Declaration of Human Rights, Karama HRFF included a full day program with film screenings, musical performances, speeches and discussions under the title “Window on Karama Yemen”, along with an official “Human Rights Day Ceremony” in collaboration with OHCHR.

To view a comprehensive list of the screened films, please vist: https://karamafestival.org/festivals/this-years-pro/program/1