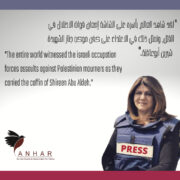 On the 15 of May 2022, the Arab Network for Human Rights Film Festivals issued a statement denouncing the assassination of the journalist Shireen Abu Akleh, as a brutal act and flagrantly contrary to fundamental freedoms and to the Universal Declaration of Human Rights. This dangerous act prompted the ANHAR network to urge the community of filmmakers and human rights film festivals, to morally commit to a cultural boycott of Israel.

A statement issued by the Arab Network for Human Rights Films; ANHAR, on the assassination of the martyr journalist Shireen Abu Akleh.

The Arab Network for Human Rights Films urges the community of filmmakers and human rights film and arts festivals to morally commit to a cultural boycott of Israel.

The Arab Network for Human Rights Films – ANHAR – calls on all filmmakers, film platforms, and international human rights film festivals to commit to and engage in the Boycott*, Divestment, and Sanctions (BDS) movement that works to end international support for Israel’s oppression of Palestinians and pressure Israel to comply with international law.

The call for the cultural and academic boycott of Israel is a moral rejection of the systematic violations practiced by the State of Israel, such as forceful occupation of land, illegal settlement activities, apartheid policies, and denying Palestinian refugees their right of return in accordance with international laws.

The Arab Network for Human Rights Films – ANHAR – stresses that the assassination of Palestinian-American journalist Shireen Abu Akleh, Al-Jazeera veteran correspondent, during her coverage of the Israeli invasion of Jenin refugee camp in the occupied Palestinian Territories is part of a policy pursued by the Israeli occupation state in deliberately attacking and killing journalists, activists, and medical crews, in addition to the systematic violations and killing of defenseless civilians for decades in Palestinian camps, villages, and cities.

ANHAR recalls the coverage of the martyr Shireen Abu Akleh of the Israeli invasion of Jenin camp for Palestinian refugees in 2002, and recalls when the Israeli forces killed Iyad Samoudi, the executive producer of the film “Jenin Jenin” [a documentary tracing, through eyewitnesses, the crimes committed by the occupation forces during their invasion of the same camp 20 years ago].

ANHAR regrets the continuation of some human rights festivals, platforms, producers, and filmmakers in ignoring the struggle of Palestinian civil society and its advocates against the occupation and its apartheid policies (which have been documented by international organizations through extensive field research, including Amnesty International) and their failure to commit to the cultural boycott of Israel, which aims to recreate the international community’s struggle against the defunct apartheid regime in South Africa.

Field journalism is an integral part of uncovering the truth and documenting reality. We at ANHAR are appalled at the level of disregard by international media networks and some human rights, and women rights groups in failing to clearly and explicitly condemn the assassination of journalist Shireen Abu Akleh. We consider this a reflection of the culture of abhorrent colonial insolence.

The whole world can witness the systematic human rights violations committed by the Israeli occupation forces on screen. This was clearly represented in the Israeli attack on the funeral procession and pallbearers carrying the body of martyr Shireen Abu Akleh while leaving the French Hospital in occupied Jerusalem. This horrific scene in its cruelty represents the daily and systematic oppression of the occupying forces against Jerusalemites and their funeral ceremonies, and Israel’s attempt to eradicate everything that is Palestinian from Jerusalem. This was preceded by the occupation forces’ attack on the home of the martyr’s family and the vicinity of the church, the site of funeral mass.

Today, Shireen Abu Akleh has become a symbol of professionalism and commitment that transcends the geography of Palestine. She represents a model for the struggling, professional, determined, and courageous Arab woman, which defies all the false impressions established by the culture of orientalism and biased Western media.