Festival’s preparation are going on steadily from starting to ask for the selected films by the selection committee to reserving the spaces at the Royal Cultural Center and Amman Municipality Hangar, together with agreements of partnership with the Ministry of culture and Amman Greater Municipality. The theme of this year’s edition will be “Human Rights in a Virtual World” in an attempt to open a discussion regarding the drastic changes imposed on the concepts of both; individual and society’s freedom, due to the changes and effects caused by the epidemic of COVID 19. Also, to examine the impact of this new world has had on our interpretation of human rights.

The Karama HRFF 12th edition team is planning for the festival to be  mounted physically in theatres almost as it used to be prior to the epidemic from 5 to 10 of December 2021, as well as holding screenings on the online platform dedicated to ANHAR Network and Karama Platform from 5 to 20 of December 2021. The Festival will host 60 Films from various countries and a set of parallel activities and seminars as well as concerts and art exhibitions and open air screenings on the walls of the old city of Amman. Karama HRFF hopes to hold ANHAR annual meeting in a physical encounter during the festival days.

This year’s film submission is not for free as it used to be, but it is free for the Jordanian films. 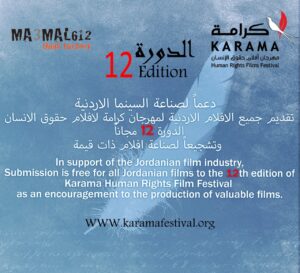